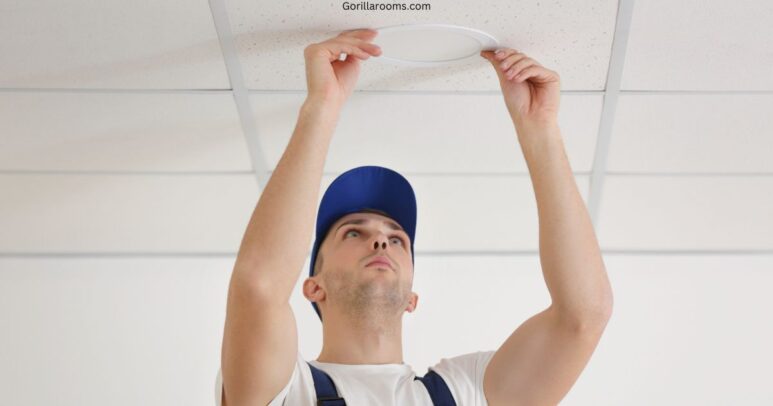 Ceiling lights are inexpensive ways to illuminate a home. But if the ceiling light gets fused, you must remove the plastic cover to change the light.

I will discuss the process of each ceiling light separately.

How Can I Remove Plastic Ceiling Light Cover Without a Screw?

First, let’s talk about ceiling lights without screws, as you can easily remove these light covers. You don’t need any screwdriver or pry bar to remove the cover.

But don’t forget that such ceiling lights are too fragile. If you insert more pressure on it, the cover might break.

So here are a few important steps that you can follow to remove plastic ceiling light cove with no screws.

Step 1: Turn Off The Main Switch

So don’t forget to turn off the main switch.

However, there is no potential risk involved in this process. But most experts recommend turning off the main switch while removing the ceiling light cover. Because sometimes, we accidentally touch any wire that might cause an electric shock.

Step 2: Use Gloves For Protection

For extra protection, you can also use Gloves. Leather gloves are most recommended for electric work. These gloves protect your hands from scratching or any kind of electric shock.

If you have such gloves at home, wear them before proceeding further, and if you don’t, don’t worry; gloves are not too essential.

Step 3: Arrange A Ladder or Stool

Unluckily, I don’t have both of these, so I put a chair on a table and easily reached my home ceiling. It’s pretty risky. Ask her to hold the table firmly if you have a partner at home. And if you’re alone, then don’t try this method.

There will be a notch if you have a ceiling light with no screw. Such light covers are easy to remove, just put a plan screwdriver under the notch and pull down gently. Don’t pull the cover rapidly, as it might break.

You can still use your nails to remove the cover if you don’t have any screwdriver or pry bar.

The second type of ceiling light with no screw has a rotating mechanism.

But remember to never put too much pressure on the cover as it can break.

If the ceiling light cover is not rotating or stuck, then you don’t need to worry about it. Use soft tools like your leather shoe sole, wallet, or other things. Then rotate it towards the left side, and remove the cover.

That’s it! Now you can change the ceiling light easily.

6- Put The Cover Back Again

How Can I Remove Plastic Ceiling Light Cover With Screw?

Do you have a plastic ceiling light cover with a screw?

If yes, then grab a screwdriver or screw to remove the machine. Such kind of ceiling light cover takes extra time because you have to remove screws carefully.

The first three steps are similar to the previous method, so we will now discuss Step 4.

It’s time to remove the screw from the ceiling light. Hold the cover and use the other hand to unscrew the knobs. It will be good to have a screw-opening machine because it saves you a lot of time.

After opening the screw carefully, put them into your pocket or any other safe place, So that you don’t have to worry about finding them later.

The last step is to remove the ceiling light cover. And that’s it, and you completed your task. Now you can change the bulb.

How Can I Remove The Plastic Ceiling Light Covers With a Clip?

This method is a very short. You need long-nose pliers and needle-nose pliers. If you don’t have these tools you can also use your hands. The first three steps are similar to the previous methods. You must turn off the main switch, wear safety gloves, and find a ladder to reach the ceiling.

So here are the next steps that you have to follow.

First, grab a long-nose plier and find the clips that have to be removed. Now gently pull down the clips with the help of a plier. Don’t do this process quickly or aggressively because it might damage the clips.

Some ceiling lights have three clips, and you have to only remove one of them. The removable clip is already loose, so you only have to pull this clip.

Once the clips are removed, the ceiling light cover gets loose, and you can easily remove it now.

How to remove the square ceiling light cover?

If there are screws, unscrew the knobs, use a utility knife, and gently pull down the cover. Square ceiling light covers are difficult to remove, so you must be careful not to damage the cover.

How to remove the ceiling light cover with spring clips?

What can I use instead of a ladder to reach the ceiling?

Suppose you have ceiling lights in your home; then you must know how to remove their covers. Sometimes the bulb inside the ceiling gets a fuse, so you have to replace it. And it is only possible if you remove the plastic cover.

I hope you find this article helpful; if you still face problems, feel free to ask me.

How Many Ceiling Fans Are On A 15 Amp Circuit

How To Hang Tapestry On Ceiling Without Holes?