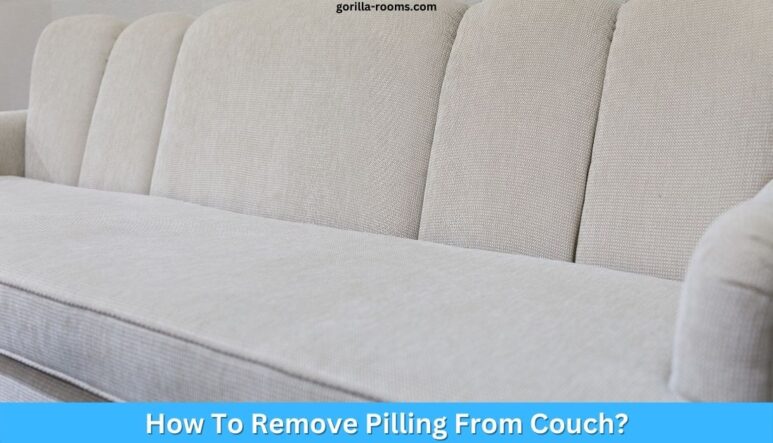 With time, the fabric sofa will lose its fabric quality, and the fabric starts to ball up due to friction. Friction is the major cause of pilling.

Although pilling doesn’t cause any damage to your sofa, it can devalue your sofa. I know you feel dispirited when someone sees pilling on your couch.

But you don’t need to worry about pilling on the couch, and you can easily remove it. Keep reading to know the best methods to remove pilling from couch.

How To Remove Pilling From Couch?

Removing pilling from the couch is time-consuming; no matter which method you’re using, every method takes time. So keep reading to learn about some best methods to remove lint balls from the sofa.

The first and most recommended method is using a fabric shaver. Few people mess this with a normal shaver, but it’s different from it.

Fabric shaver helps remove lint balls, fluff, and fuzz balls from the couch and makes it look new. This portable shaver has two rotating blades underneath that removes the lint balls.

Most people think that the blades of the fabric shaver can tear off the sofa fabric, but this is not true. Fabric shavers come with a blade cover, making them safe for all fabric types.

The best part is you can adjust the shaver cover height, so if the lint is too small, it also works well on it. Plus, you can also adjust the speed of the blades and adjust them according to your preferences.

How To Remove Lint Ball With Fabric Shaver?

There are two types of users reading this article right now; one having fabric shavers, and others don’t have this handy tool. So you can buy it from any online store. Beautral fabric shaver is the most recommended shaver that you can buy. 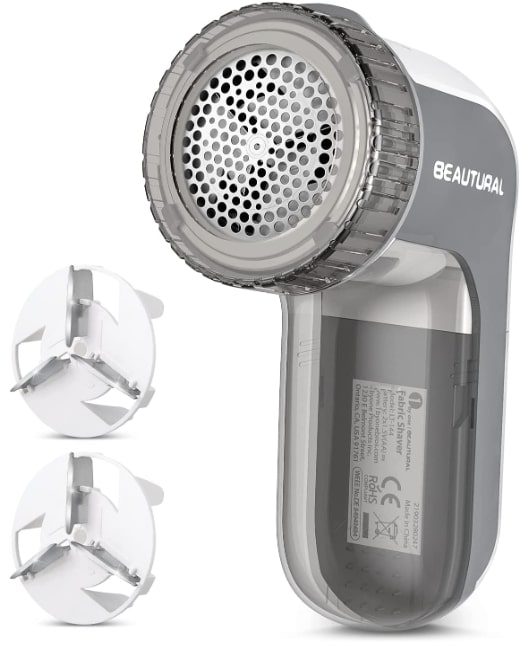 Lint ball remover is another handy tool to remove lint from your sofa and other fabrics. This tool not only removes pilling on the couch but also gets rid of pet hairs and other fluff.

Lint ball remover also has blades which efficiently remove fuzz and lint balls. This manual shaver is just like your regular shaver, but it’s safe and doesn’t damage the couch’s fabric.

The good part is that a Lint ball remover is quicker than a fabric shaver, especially if you have a larger sofa; it’s an effective tool for lint removal. But you must use it carefully, and it can snag on seams. And if you insert too much force, it can damage your sofa’s fabric.

3- Use A Sandpaper Sponge

You can use a sandpaper sponge to remove lint if a fabric shaver is unavailable at home. All you have to do is scrub it on the effective areas of the couch, and it will remove the pilling from on couch.

But if you have thick sofa fabric, you can use sponge sandpaper.

Every homeowner must have scissors at home, and you can use these scissors to remove lint balls from the couch. If you don’t have a fabric shaver or sandpaper sponge available, scissors are the next option.

But to remove pilling on the couch, you must use small scissors, and large scissors are not effective for lint ball removal.

Scissors take a lot of time, so if you have a small amount of lint ball on certain areas of the couch, you can use scissors. But it seems foolish to use scissors to remove the pilling from the entire couch.

Sweater combs are also famous for removing pilling from different fabrics and sweaters. This is not something like a regular hair comb. The sweater comb has sharp teeth that are closer and effectively remove pilling.

To use a sweater comb, pull the fabric raft and scrape the affected area. Again sweater comb is not too effective if your lint balls are spread on a larger area.

But before using a hair trimmer on the couch, test it on a small area; if it works well, use it on the entire couch. But hair timers don’t work well for small lint balls, so you must invest in a fabric shaver to eliminate pilling.

What Is The Major Cause Of Pilling On Couch?

Pilling on fabric is a normal process, not because of your fault. According to the research, pilling is the most common problem with synthetic fabrics.

With time the synthetic fabric becomes loose, and because of friction, they start twisting together into small balls. These lint balls grow with time and cause pilling.

The more you use your couch, the more friction will be, and the lint ball will grow faster.

As the lint ball increases, the couch looks more wired and old, devaluing your home. So you have to either replace it with a new couch or remove the pilling using above mentioned methods.

Can I Use Regular Shaver To Remove Pilling On Couch?

There is nothing wrong with using a regular shaver to remove pilling on the couch. But regular shavers can be dangerous for thin and delicate fabrics.

But if you have a lint ball on a smaller couch area, you can use a regular shaver. Also, the regular shaver is a convenient way to tread pilling, but before using it, test it on a small area to avoid big damage.

Tips To Follow Before Removing Pill From Your Couch

Before removing the pill from the couch, you must keep a few things in mind.

Which Sofa Fabric Is More Prone To Pilling?

Fabric sofas made of synthetic fibres are more prone to pilling. Polyester or acrylic fibers attract pilling more quickly than any other fabric.

In a nutshell, pilling appears on every single fabric. It also depends on how much you expose your couch to friction. The more friction on the couch, the faster it will start pilling.

In general, man-made fabrics with short fiber could pill. The loose fibers in the fabric, the more quickly it will pill.