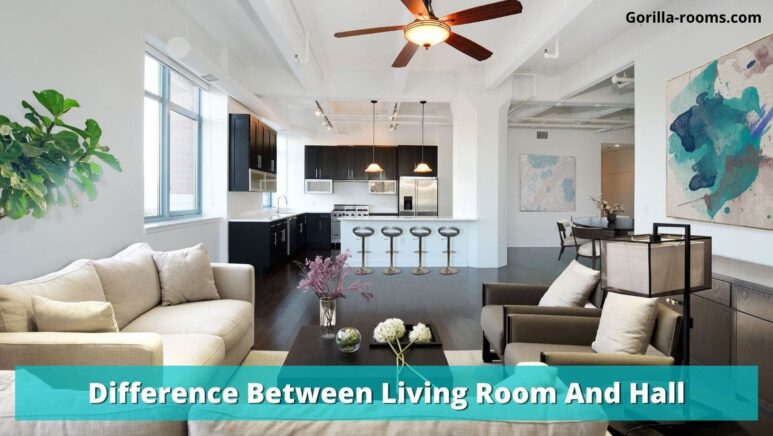 The living room is only the space in a home where anyone can rest, enjoy deep sleep, watch TV, spend time with family and more. Where as hall can be used to serve special guests.

But most people say that the Living room is the same as Hall. I agree with this because most of the features and things are the same in both just like the drawing room and living room.

But still, there are few differences between Living room and Hall, that you should know before making any decoration or try new outfit in your home.

What Is The Difference Between Living Room And Hall?

A living room is a space used for social activities generally for family use, and sometimes also used for guests if you don’t have a drawing-room. In a living room, you can place different entertainment sources, TV, swings, fireplace, and other such things.

On the other hand, the hall is the space used to serve the special guest. There is no entertainment activity or other activity takes place.

Most of the people don’t make the halls in their houses because they have small areas, so in that case, you can use your drawing room or a living room as a hall.

The concept of the hall was first presented by the Iron Age and early Middle Ages in Europe, their lords and retainers use the hall to enjoy dinner and also sleep. And later in the Middle Ages, these halls were built in the castles and large houses for servants and slaves.

Now in some USA regions halls are used as space where you can keep your shoes and jackets etc. And these people consider the living room to be for eating, relaxing, and watching TV. In few regions of the world, the hall is considered a parlor where you have proper seating arrangements and people sit and wait there.

In a nutshell, the living room is used for family purposes and entertainment. Whereas the hall room is used to serve special guests like family lawyers, doctors, or business meetups, and you don’t have any entertainment source there.

Read More: Decorate A Living Room With Front Door In The Middle

Is It Correct To Call Living Room a Living Hall?

If you have read the above section, you can identify the major difference between them. And In most cases, it’s awkward to call your living room a living hall.

Because both rooms are used for different purposes. The living room is for the family whereas the living hall is for the best.

But in some other scenarios, like if your home is built on a small area and you are unable to build a hall, then you can use your living room as a hall. In such a case you can also call your living room a drawing-room.

Is the Living Hall and Drawing room the same?

Now, these are confusing terms, and many people get stuck while knowing their differences. Both the living hall and drawing room are used to serve guests. But again there is a minor difference between them.

Drawing rooms are a small space in your home to serve guests and they also have entertainment sources just like your living room.

Whereas the Living hall is large and has no entertainment source. Although you can put a TV and other stuff like that. But traditionally halls only contain furniture and seating areas to serve special guests.

Why There Is No Living Halls in US houses

There are many types of homes in the US, some follow the traditional architecture and built hall and others not. Modern home design just focuses on open design and maximum living area. They consider halls as a waste of space.

Instead of halls, they use a drawing room or parlour for their family guests as well as special business guests. In some cases, most of the people have huge areas or built their castles, so their millionaires must make living halls in their houses.

There is much difference between the living room and hall room, so you don’t call your living room a hall. Both have different purposes and designs. And most people don’t make a living hall in their rooms, instead, they prefer drawing rooms.

9 thoughts on “Here Is a Major Difference Between Living Room And Hall?”